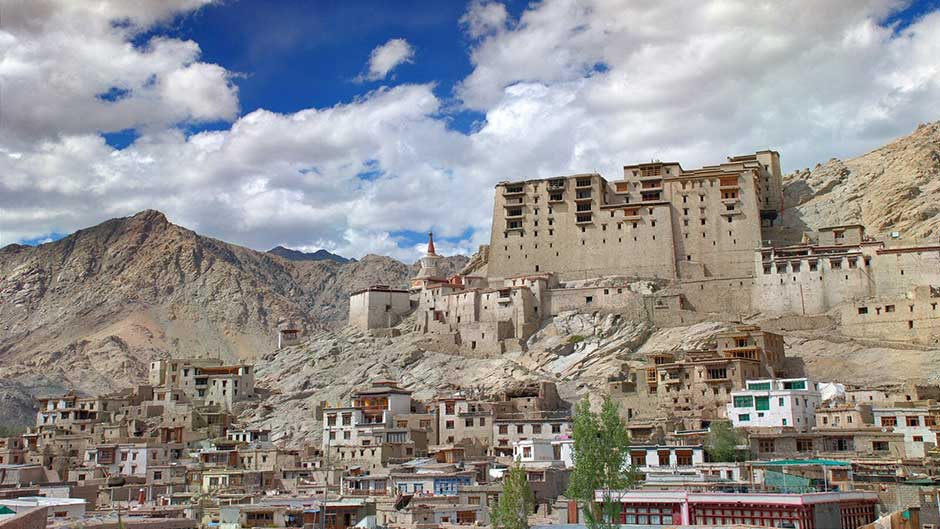 Upon arrival in Leh , Meet and assistance at the airport and transfer by car to Hotel. One is advised to take complete day rest for acclimitization.

Leh - Ladakh : Ladakh at an altitude of 11500 Ft. is a land like no other. Bounded by two of the world's mightiest mountain ranges, the Great Himalaya and the Karakoram, it lies athwart two others, the Ladakh range and the Zanskar range. Ladakh is also known as the land of passes. Meals and overnight at Hotel Royal Haritage or similar.

After breakfast half day sightseeing of Sankar Gompa: Located on a valley floor and is the home to Lamas who belong to yellow sect and worship his Holiness - The Dalai Lama. Visit Shanti Stupa : a Buddhist religious monument built by Indian based Japanese Monk whose intention was to spread Buddhisim by building such stupas throughut the world & Leh Palace : the 17th. Century looking for all the world like a miniature version of the Potala in Lhasa. After Noon Visit SINDHU DARSHAN Thicksey , Kali Mandir, Hall of Fame, Magnetic Hill, Pather Sahib. The rest of the day is free for personal activities . Meals and overnight at Hotel.

After early breakfast full day sightseeing of Shey,Thicksey & Hemis. Shey was the summer Palace of Ladakhi Kings and is where you can see the 36Ft. high statue of Buddha made of copper and covered with gold. Thicksey : The twelve storeyed monastery of Thicksey is situated in the most prominent of positions, lies on an island Mountain. Finally visit; Hemis : Farthest away from Leh, this is the wealthiest Monastery in Ladakh belonging to the Red Sect - it is here each summer that plays are held and Ladakhis from all parts of the country will visit Hemis. Evening return to Leh. Meals and overnight at Hotel.

Check out from hotel in time to catch your onward flight back home.

Cradled in the lap of majestic mountains of the Himalayas, Kashmir is the most beautiful place on earth. The state of Jammu & Kashmir is rightly called 'Paradise'. It is situated right at the top most part of the country and if Mother India is a 'Queen', then Jammu & Kashmir surely looks like the 'Crown' on her head. From sun-kissed mountains, lush green valleys, beautiful gardens, to blue lakes, the state of Jammu and Kashmir has it all.