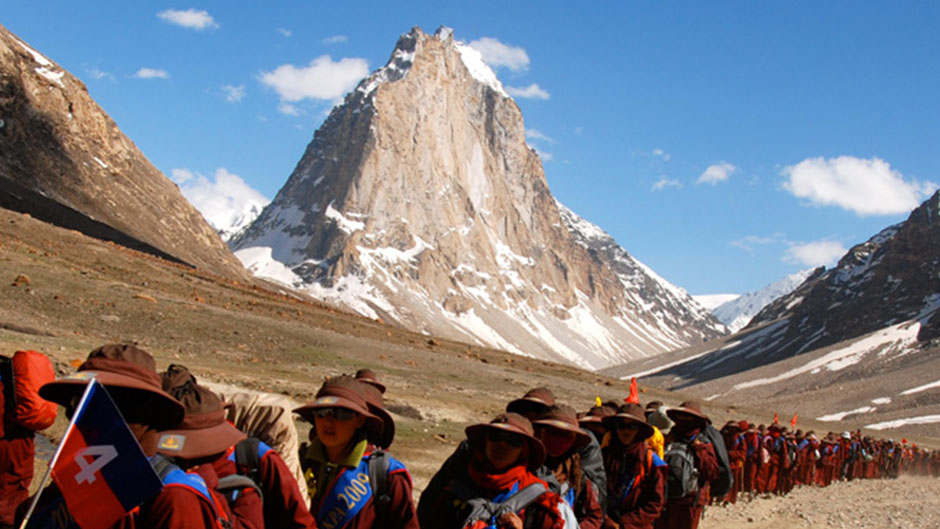 Zanskar covers an area of some 7,000 square kilometres (2,700 sq mi), at a height of between 3,500 and 7,000 metres (11,500–23,000 feet). It consists of the country lying along the two main branches of the Zanskar River. The first, the Doda, has its source near the Pensi-la (4,400 m) (14,450 ft) mountain-pass, and then flows south-eastwards along the main valley leading towards Padum, the capital of Zanskar. The second branch is formed by two main tributaries known as Kargyag river, with its source near the Shingo La (5,091 m) (16,703 ft), and Tsarap river, with its source near the Baralacha-La. These two rivers unite below the village of Purne to form the Lungnak river (also known as the Lingti or Tsarap). The Lungnak river then flows north-westwards along a narrow gorge towards Zanskar's central valley (known locally as gzhung khor), where it unites with the Doda river to form the Zanskar river.

For locals and trekkers alike, the Shingo La is technically one of the easiest 5000m passes in Indian Himalaya, involving no glacier trekking nor steep climbs. "The Shingo La, the main route into Zanskar from Lahaul, is an unpleasant pass. It isn't particularly high, at just 17,000 feet, but it is squalid and sordid and lacks grandeur."
The Zanskar river then takes a north-eastern course until it joins the Indus in Ladakh. High mountain ridges lie on both sides of the Doda and Lingti–kargyag valleys, which run north-west to south-east. To the south-west is the Great Himalayan Range which separates Zanskar from the Kisthwar and Chamba basins. To the north-east lies the Zanskar Range, which separates Zanskar from Ladakh. The only outlet for the whole Zanskar hydrographic system is thus the Zanskar river, which cuts the deep and narrow Zanskar Gorge through the Zanskar range.

Much of Zanskar's vegetation is found in the irrigated villages, and on the upper slopes which receive more precipitation and where it consists of alpine and tundra species. Most impressive are the meadows covered with thousands of edelweiss. At the foot of the Gumburanjon mountain blue poppies can be found. Crops including barley, lentils, and potatoes are grown by farmers at the lower elevations. Domesticated animals such as the yak, dzo, sheep, horse, and dog are found in the region.

Tourism is probably the major disruption that Zanskar has experienced during recent times. The opening of this region to foreigners has brought benefits such as the financing of schools and the restoration of monasteries and roads, but has also taken its toll on this fragile mountain environment and its population.

Zanskar is a high altitude semi-desert lying on the Northern flank of the Great Himalayan Range. This mountain range acts as a climatic barrier protecting Ladakh and Zanskar from most of the monsoon, resulting in a pleasantly warm and dry climate in the summer. Rain and snowfall during this period are scarce, although recent decades have shown a trend towards increasing precipitation. Several water-driven mills were built during ancient periods of drought at a great distance from the villages, but have been abandoned because running water is now available nearer to the settlements. Zanskari houses, though otherwise well built, are not adapted to the recently increasing rainfall, as their roofs leak, catching their surprised inhabitants unprepared. Most of the precipitation occurs as snowfall during the harsh and extremely long winter period. These winter snowfalls are of vital importance, since they feed the glaciers which melt in the summer and provide most of the irrigation water. Parts of Zanskar valley are considered some of the coldest continually inhabited places in the world.