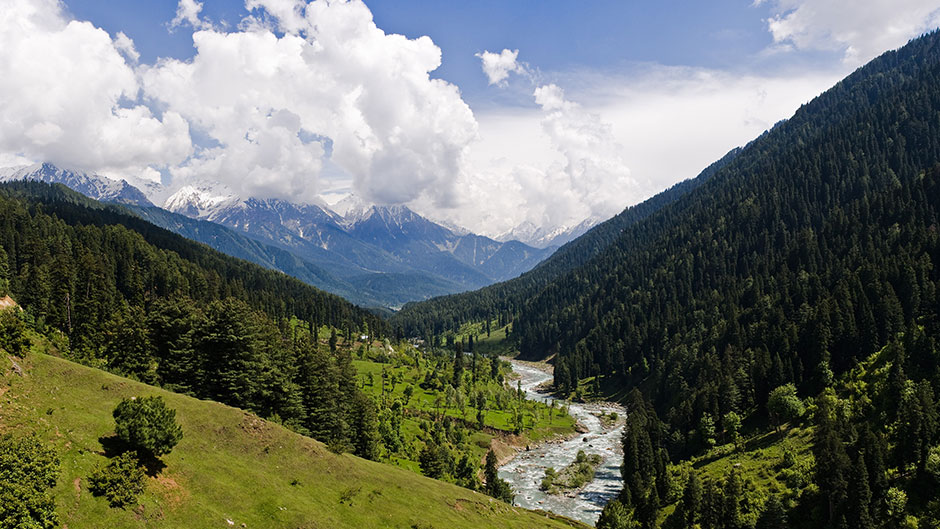 Pahalgam is a town and a Municipal committee in Anantnag district in India's northernmost state of Jammu and Kashmir. It is a popular tourist destination, and every year, many tourists visit Pahalgam. This world famous hill station is 45 km. from the District Head Quarter at Anantnag and located on the banks of Lidder River at an altitude of 7200 ft. from sea level. Pahalgam is one among the five tehsils of Anantnag district and tehsil head quarters are located in the main town of Pahalgam. It was once a tourist attraction and a favourite place for shooting of Bollywood films, and is still a health resort. Besides tourist huts, several hotels in private sector have come up here and these hotels provide modern facilities to their guests. A number of treks in this region also begin from Pahalgam, as the 35 km trail traverses through pinewoods to the spectacular Kolahoi Glacier.

Pahalgam is also associated with the annual Amarnath Yatra. Chandanwari (2,895 m), 16 km from Pahalgam, is the starting point of the yatra that takes place every year in the month of Sawan (July to August). The road from Pahalgam to Chandanwari is on fairly flat terrain and can be undertaken by car. From Chandanwari onwards the track becomes much steeper, and is accessible on foot or by pony. About 11 km from Chandanwari is the mountain lake of Sheshnag (3,574 m), after which, 13 km away is the last stop, Panchtarni. The Amarnath cave is 6 km away from there. During the month of Sawan, an ice stalagmite forms a natural Shivling in the Amarnath cave.

Kolohoi Glacier, situated up the Lidder Valley, just below Kolhoi Peak is currently a hanging glacier. It is accessible from Pahalgam via Aru. It is known to have extended for at least 35 km in the past. It is basically hollowed out from global warming, the Asian brown cloud, and local environmental factors associated with mountain hydrology. According to the mountaineers from Jawahar Institute of Mountaineering (JIM) in 2008, the glacier has receded by half since 1985. The glacier is not safe to study because it is hollow and in places has 200-foot-deep (61 m) crevices.

Betaab Valley is a very famous tourist spot situated at a distance of 15 kilometers from Pahalgam. The valley got its name from the Sunny Deol-Amrita Singh hit debut film Betaab. The Valley is towards northeast of Pahalgam and falls between Pahalgam and Chandanwadi and is en route Amarnath Temple Yatra. The valley surrounded by lush green meadows, snow clad mountains and covered with dense vegetation.