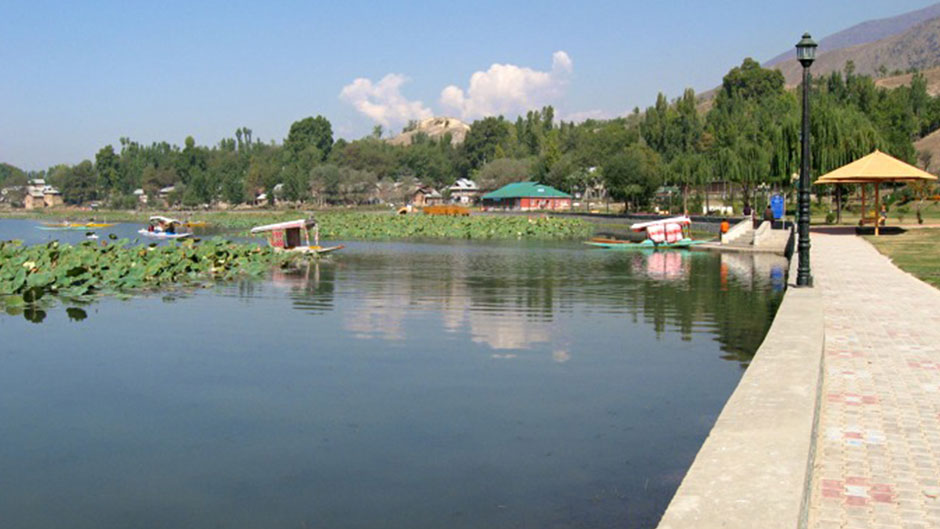 Manasbal Lake is located about 30 km north of Srinagar, the summer capital of Jammu and Kashmir State. It has predominantly rural surroundings with three villages, Kondabal, Jarokbal and Gratbal overlooking the lake. Manasbal is considered as the 'supreme gem of all Kashmir lakes' with lotus (Nelumbo nucifera) nowhere more abundant or beautiful than on the margins of this lake during July and August. It is the deepest lake of Kashmir valley and perhaps the only one that develops stable summer stratification. Manasbal is classified as warm monomictic lake and circulates once in a year for a short time. The other lakes in the region either have weak stratification or are polymictic. Close to the northern shore are the ruins of a fort which was built in 17th century by a Moghul king to cater the needs of caravans that used to travel from Panjab to Srinagar. On the south, overlooking the lake is a hillock-Ahtung which is used for limestone extraction. The eastern part is mainly mountainous and towards the north is an elevated plateau known as 'Karewa' consisting of lacustrine, fluviatile and loessic deposits.

The lake has no major inflow channels and the water supply is maintained through spring water inflow and precipitation. An outlet channel connects the lake with the Jhelum River. The outflow of water is regulated artificially.

A grove of Chinar trees at the nearby village of Safapur is known as Badshah Boni, royal Chinar, and was planted in imitation of the Nasim Bagh in Srinagar . A canal taken from the Sindh River, constructed by a Badshah in the 15th century, irrigates Safapur. Nearby is a cave dug by a mystic, with his grave lying next to a small shrine. Near this is situated a tourist hut.

The weather is pleasant in the months of May and August, when the lake offers water skiing sport, which is now becoming an increasingly popular activity in many rivers and lakes in India. Jammu & Kashmir Tourism Department (JKTD) provides essential water skiing equipment and trained instructors to adventure seekers.The lake’s surface sheen and its long length and width attract tourists to water skiing sport. However, the noise and turbulences of waterskiing boats will totally change the environment of this last quiet lake and could risk to take away one of its main attractions: Peace. There is still a discussion going on whether or not a more environmentally sensitive form of sustainable tourism would be more appropriate for this special lake - to not turn it into a second Dal Lake.