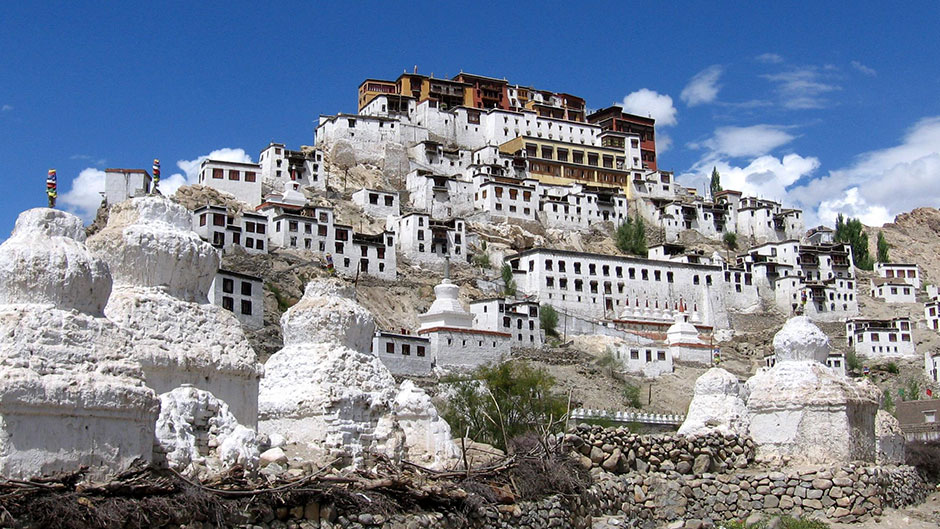 Few places in India are at once so traveller-friendly and yet so enchanting and hassle-free as mountain-framed Leh. Dotted with stupas and crumbling mud-brick houses, the Old Town is dominated by a dagger of steep rocky ridge topped by an imposing Tibetan-style palace and fort.

Beneath, the bustling bazaar area is draped in a thick veneer of tour agencies, souvenir shops and pizza restaurants, but a web of lanes quickly fans out into a green suburban patchwork of irrigated barley fields. Here, gushing streams and narrow footpaths link traditionally styled Ladakhi buildings with flat roofs, sturdy walls and ornate wooden window frames. Leh’s a place that’s all too easy to fall in love with, but take things easy on arrival. The altitude means that most visitors initially suffer mild headaches and breathlessness. To prevent this becoming full-blown Acute Mountain Sickness (AMS), drink plenty of ginger tea and avoid strenuous exertion at first. Climbing Palace Ridge or Shanti Stupa on your first two days in Leh is unwise unless you’re already altitude-acclimatised. Similarly it’s wise to wait before trekking or taking jeep excursions over high passes (to Nubra or Pangong).

Leh was an important stopover on trade routes along the Indus Valley between Tibet to the east, Kashmir to the west and also between India and China for centuries. The main goods carried were salt, grain, pashm or cashmere wool, charas or cannabis resin from the Tarim Basin, indigo, silk yarn and Banaras brocade.

Although there are a few indications that the Chinese knew of a trade route through Ladakh to India as early as the Kushan period (1st to 3rd centuries CE),and certainly by Tang dynasty,little is actually known of the history of the region before the formation of the kingdom towards the end of the 10th century by the Tibetan prince, Skyid lde nyima gon (or Nyima gon), a grandson of the anti-Buddhist Tibetan king, Langdarma (r. c. 838 to 841). He conquered Western Tibet although his army originally numbered only 300 men. Several towns and castles are said to have been founded by Nyima gon and he apparently ordered the construction of the main sculptures at Shey. "In an inscription he says he had them made for the religious benefit of the Tsanpo (the dynastical name of his father and ancestors), and of all the people of Ngaris (Western Tibet). This shows that already in this generation Langdarma's opposition to Buddhism had disappeared."Shey, just 15 km east of modern Leh, was the ancient seat of the Ladakhi kings.