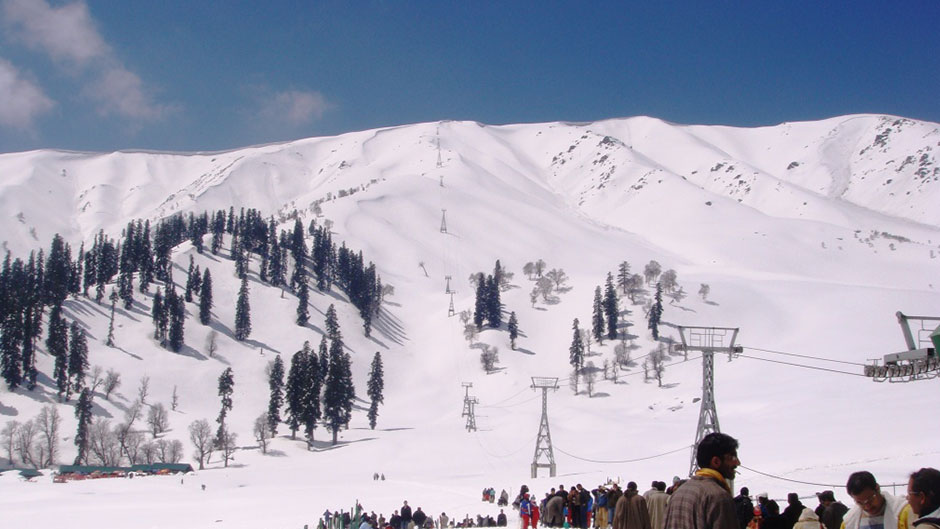 Gulmarg (translation: "Meadow of Flowers") is a town, a hill station, a popular skiing destination and a notified area committee in Baramula district in the Indian state of Jammu and Kashmir.

The town is within the Himalayas and is within miles of the Line of Control between India and Pakistan.

Gulmarg has been a resort for the kings like Yousuf Shah Chak and Jahangir who used to visit frequently. The old name of Gulmarg was "Gaurimarg", the name of Lord Shiva's wife. Yousuf Shah Chak changed its name to Gulmarg, meaning the place of roses. During the early part of the 20th century the famous Central Asian explorer Sir Marc Aurel Stein (1862–1943), made his home here in a tent between his expeditions. It was a favourite summer holiday destination for the British stationed in India.

Gulmarg in August 1969 The surrounding areas were politically restive during a period of relative peace and quiet. The town is nestled within the imposing Himalayan peaks, and lies within miles of the Line of Control. It receives heavy snowfall during the winter season and is a popular ski resort

Gulmarg is easily accessible from Srinagar or Srinagar Airport (SXR), the capital of Kashmir, in under 2 hours by car or bus. Just 1 hour on the way is the town of Tangmarg, a key tourist attraction and also a main destination for skiers riding down from Gulmarg during the winter months. From Tangmarg, the Gulmarg plateau is just 30 minutes travel. Gulmarg has around 40 hotels ranging from extremely budget accommodation in private huts to hotels that are of a similar standard to a western Bed & Breakfast

According to CNN, Gulmarg is the "heartland of winter sports in India."Gulmarg was being mooted as a possible host for the 2010 Commonwealth Winter Games. As such, Gulmarg has been rated by CNN International as Asia's seventh best ski destination.This resort is famous because of its "Gulmarg Gondola," one of the highest cable car in the world, reaching 3,979 metres.The two-stage ropeway ferries about 600 people per hour to and from the gondola main station in Gulmarg to a shoulder of nearby Mt. Apharwat Summit (4,200 m (13,780 ft)). The ropeway project is a joint venture of the Jammu and Kashmir government and French firm Pomagalski. The first stage transfers from the Gulmarg resort at 2,600 m (8,530 ft) to Kongdoori Station at 3,080 m in the bowl-shaped Kongdori valley. The second stage of the ropeway, which has 36 cabins and 18 towers, takes skiers to a height of 3,950 m (12,959 ft) on Kongdoori Mountain, a shoulder of nearby Mt. Afarwat Peak (4,200 m (13,780 ft)). The second stage was completed in a record time of about two years at a cost of Rs11 crore and opened on May 28, 2005. The French company had also built the first phase of the gondola project, connecting Gulmarg to Kongdoori, in 1998. The JKSCCC also constructed chair lifts to connect Kongdoori with Mary’s Shoulder for intermediate and advanced skiers.