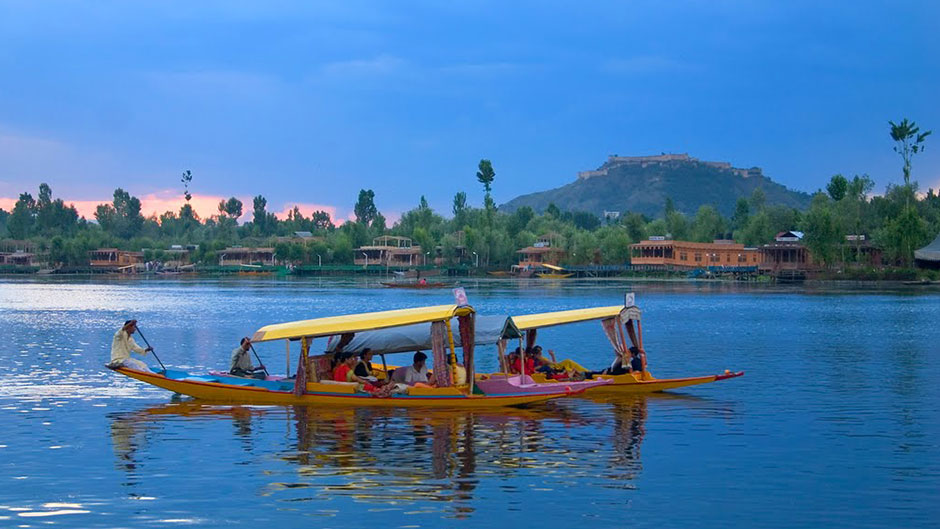 Dal Lake is a lake in Srinagar, the summer capital of Jammu and Kashmir. The urban lake, which is the second largest in the state, is integral to tourism and recreation in Kashmir and is named the "Jewel in the crown of Kashmir" or "Srinagar's Jewel".The lake is also an important source for commercial operations in fishing and water plant harvesting.

The shore line of the lake, is about 15.5 kilometres (9.6 mi), is encompassed by a boulevard lined with Mughal era gardens, parks, houseboats and hotels. Scenic views of the lake can be witnessed from the shore line Mughal gardens, such as Shalimar Bagh and Nishat Bagh built during the reign of Mughal Emperor Jahangir and from houseboats cruising along the lake in the colourful shikaras.During the winter season, the temperature sometimes reaches −11 °C (12 °F), freezing the lake.

The lake is popular as a visitor attraction and a summer resort. Fisheries and the harvesting of food and fodder plants are also important on Dal Lake.Weeds from the lake are extracted and converted into compost for the gardens. It also serves as a flood lung of the Jhelum River.Swimming, boating, snow skiing (particularly when the lake is frozen during the severe winter), and canoeing are amongst some of the water sports activities practised on the lake.

The lake has numerous sites and places of interest, many of which are important to the cultural heritage of Srinigar. Aside from the Shalimar Bagh and Nishat Bagh, some of the other places frequented by tourists are the Shankaracharya temple, the Hari Parbat, the Nagin Lake, the Chashme Shahi, the Hazratbal Shrine, the famous Kashmir houseboat and the shikara (boat) called the Gandola of Kashmir.

Dal Lake has rightfully become an icon of the Kashmir tourism industry. A Himalayan urban lake, it has five basins and a number of channels that are well linked with each other. There are plenty of fishes in Dal Lake and fishery is the second largest industry of the region centered on the lake. The sparkling quiet waters of Dal surrounded by snow-capped mountains on its three sides, undoubtedly mark it as one of the most beautiful lakes of India. It is also the second largest lake in the State of Jammu and Kashmir with numerous gardens and orchards all along its shores. Houseboats form an indelible part of the scenery of the Dal Lake that are always ready to take tourists to a romantic and peaceful ride of the lake and soothe their nerves as the houseboat floats over the slightly rippling waters. They also offer some of the most exotic views of the splendid scenery of the Dal Lake.